Why A Culture Renovation Is Key To a More Valuable, Agile, and Innovative Company

Last year, when the U.S. House of Representatives' Transportation Committee released its final investigation on the Boeing 737-max crashes that killed 346 people, their report cited that, among other things, a "culture of concealment" by Boeing and the FAA was a significant factor which led to the crashes.

A few years earlier, Wells Fargo suffered an account fraud scandal that resulted in millions in penalties and billions demanded to be paid in lawsuits. A “cutthroat sales culture” was cited by many as the primary culprit.

Despite the enormous influence of an organization’s culture on financial performance and risk mitigation, it’s still frequently dismissed as too fluffy, esoteric, or abstract to have much of an impact.

Even the corporate governance process has traditionally overlooked, or at least underestimated, the magnitude of culture’s impact on the financial stability of an organization.

For years unhealthy cultures have posed tremendous risk to shareholder value. Yet that risk went largely undetected by corporate boards until it was too late.

The Covid-19 pandemic has introduced more complexities. The dramatic shift to remote work has created new cultural norms and nuances, which has necessitated new leadership capabilities. As well-being, workforce flexibility, return to office, and other issues have impacted the day-to-day life of most leaders, organizations have increasing concerns about the toll on culture.

Like it or not, your culture changed this past year. Some companies have taken a passive and reactive approach to that change, others are more proactive. For most organizations, if improving corporate culture isn’t currently on the agenda, there’s a good chance it will be soon.

In this piece, I’ll show why renovating your culture will improve the value of your company and how to get started.

The Benefits Of Focusing On Company Culture

Company culture matters a great deal to your company’s performance.

But those examples are the exception to the rule. In most cases, it’s a healthy culture that is the cause of great market performance, and not the result.

My company - the Institute for Corporate Productivity (i4cp) - and I put this hypothesis to the test. We compared high and low-performing organizations according to specific business practices and areas of human capital. We then surveyed thousands of business professionals.

What we found is that market performance correlates with indicators of a healthy culture. 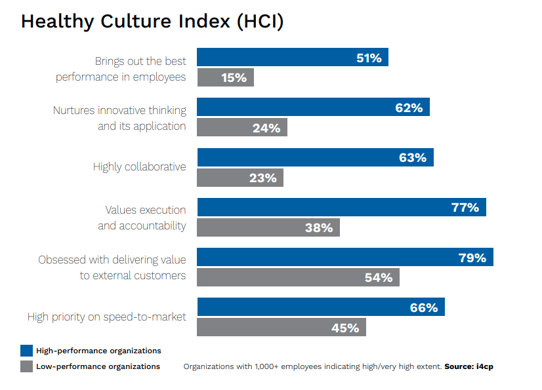 Employees at high-performing organizations are 2, 3, even 4 times as likely to describe their companies’ cultures in these terms:

This research demonstrates that your company’s long-term success is statistically tied to the culture that runs through your daily operations. And the best way to build this culture is by renovating what you have.

Stop Trying To Transform Your Culture, Renovate It Instead

The word transformation has long been used to describe culture change, but it’s not what successful companies do.

I’ve yet to come across a company that has truly “transformed” its culture into something completely different. The companies that have been effective at changing their cultures were successful because they were renovating what they had – respecting their past and their core values – not starting from scratch and completely rebuilding or transforming.

It’s similar to working on a house to improve its future value. In most cases, you wouldn’t tear it down and completely rebuild from the ground up. Instead, you work with what’s already there and renovate the foundation.

“You really need to figure out what’s at the core of your culture—what you want to keep and what you want to evolve and grow,” she says. “Just throwing away your culture is really hard to do, and I wouldn’t suggest you do that. In fact, you have to give a nod to your past in order to move forward.”

“When I joined F5 as CEO, it was almost 20 years old,” said Locoh-Donou. “There was a culture that I inherited, and then there's the culture I envisioned us evolving into. The notion of Culture Renovation®, while I wasn’t using the term then, is exactly what I was trying to do.”

The reality is that markets and society are constantly evolving and only the companies that evolve in unison will increase their chance of success.

If your company’s long-term success is a priority, renovating your culture into a strong and healthy one is a strategically sound move.

Culture Renovation Must Start At The Top

Culture permeates nearly every aspect of your company’s daily operations. Performance reviews, the chain of command, HR policies, communication rhythms, and engagement programs are all in some way affected by the overarching culture of your organization.

It’s critical then that the leadership team guides the vision and takes an active role in the culture renovation process.

An example of the crucial role of leadership in culture renovation is with Satya Nadella became CEO of Microsoft in 2014, replacing it’s previous CEO Steven Balmer. The company had experienced a string of failures in the years before, including failed products launches and losing market share to other big tech companies of the time.

Nadella introduced a new string of measures, most notably with the “growth mindset” approach that he actively embraced and shared with the company. He worked with Kathleen Hogan as Chief People Officer to reinvent the company’s culture following this mindset. In just 5 years, Microsoft had once again become one of the world’s most valuable companies.

Nadella’s tenure demonstrates how the best leaders are able to make the whole organization feel as if they are part of the effort. They facilitate a co-creation mindset by enabling and empowering employees to renovate successfully and this ensures the success of the company’s culture renovation efforts.

How To Roll Out A Culture Renovation

While renovating is the right approach, it doesn’t mask a simple fact: culture change is hard. In fact, only 15 percent of companies are successful at making long lasting, positive changes.

To find out why my team at i4cp conducted extensive research and interviewed countless executives.

We then distilled our findings into 18 steps—a Culture Renovation blueprint—for companies to successfully plan, build, and maintain a culture makeover.

Here are a few key steps from our blueprint:

The worst thing executives can do is lock themselves in a conference room and decide what the culture is today. Chances are high they will get it wrong. Instead, use technology and multiple channels to conduct a sentiment analysis of the workforce in order to have a more accurate picture.

Paint a vision for the future

Because culture change is often initiated when an organization has experienced poor performance, the temptation is to blame former leaders and admonish the mistakes of the past. Resist that impulse. Instead, architect a future vision which the workforce can rally around and aspire to achieve.

Network science shows that certain people in every workforce have greater social influence than others. Influencers and energizers are everywhere – often hiding in plain sight from senior leaders – and coworkers seek them out to ask for their views more frequently. Leaders can identify these potential “culture ambassadors” through formal or informal network analysis techniques and ensure they understand and are on-board with renovation efforts.

Given the many disruptive forces companies are facing, having a culture that evolves along with the market is a main ingredient for your company to be effective.

Even in very successful companies, culture is never something to be taken for granted. Resting on laurels has been the death knell for many famous organizations.

The goal for leaders should be to future-proof the organization, and building a great company culture is the key to making that happen. But the reality is that renovating culture is never quite complete.

Nor can you assume it’s not having a significant effect right now on your organizational success.

Get The Checklist And Start Building

Ready to to build a culture that drives engagement and value throughout your company?

Learn what it takes and track your progress with the Culture Renovation Checklist! 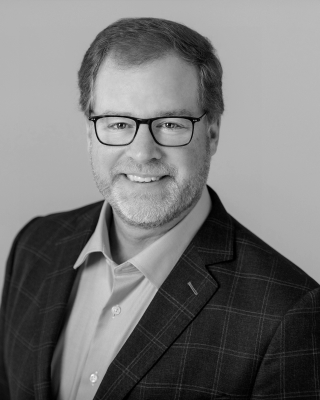 Kevin is the CEO and founder of the Institute for Corporate Productivity (i4cp), the leading human capital research company in the world. Focusing on the people practices of high-performance organizations, i4cp leverages its vendor-free community to facilitate next practices in human capital. Kevin is a frequent international keynote speaker on using human capital strategically. He is the author of "Culture Renovation - 18 Leadership Actions To Build An Unshakeable Company" published by McGraw Hill and is the co-author of "The Executive Guide to Integrated Talent Management," published by ATD Press. 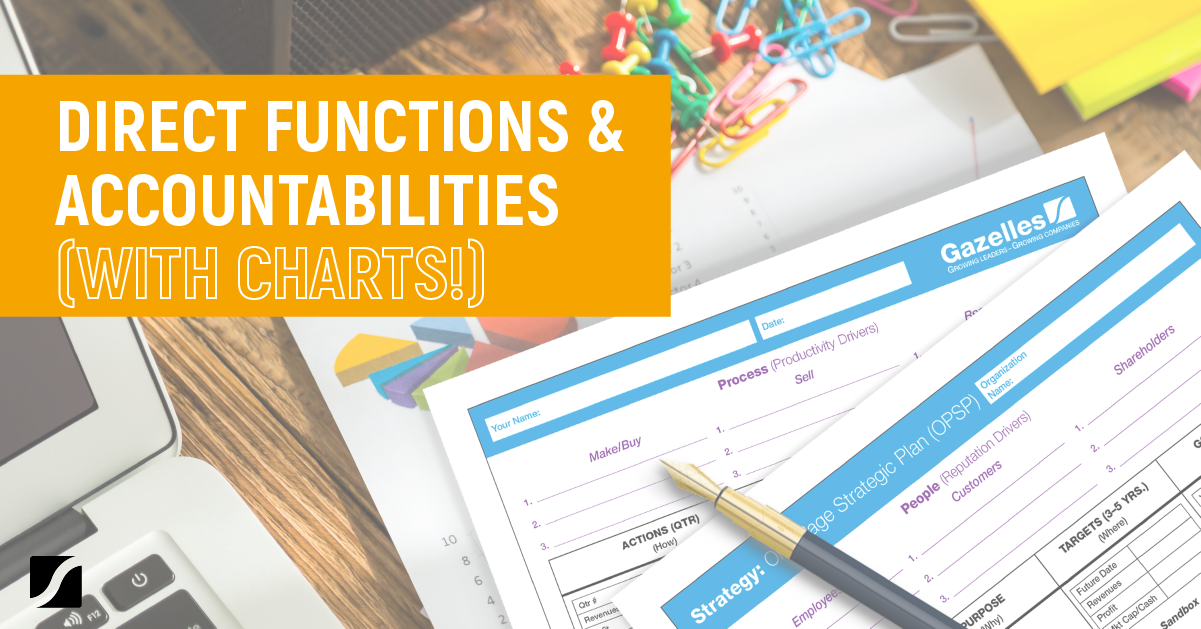 How To Direct Functions & Accountabilities In Your Business (With Charts!) 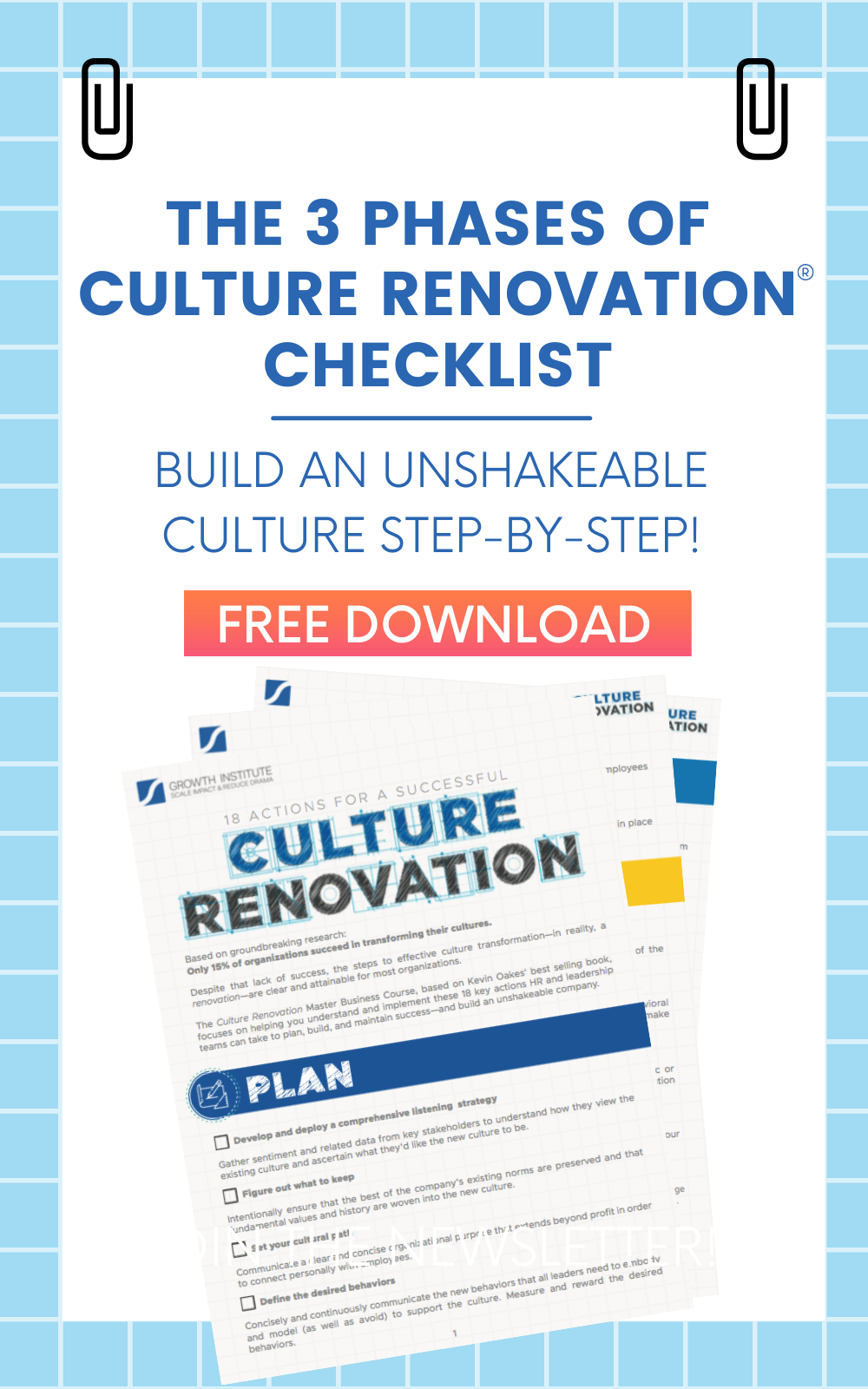