Are Mis-Hires Costing Your Business Millions? Here’s How To See Through Resume Lies

Let’s start with a little bit of math. We’re going to calculate just how much mis-hires are costing your company in dollars and hours. These numbers are based on an interview I had with a CEO and they are conservative.

Now, replace the numbers to reflect that of your own company, and tell me what answer you get

Most companies only successfully hire A-Players about 25% of the time, wasting millions of dollars or hours, both scarce resources that can definitely be put to better use. I wrote about why your company should hire mostly A-Players and how to go about doing so (and I suggest checking it out, after reading this article of course).

Intuitively, you know that you want A-Players. They “carry” the company, while C-Players suck the creative, positive energy out of the company. You may think this might not be possible with the current hiring processes in the market today.

This is where Topgrading comes into play.

“The ability to make good decisions regarding people represents one of the last reliable sources of competitive advantage, since very few organizations are very good at it.”
— Peter Drucker

How We Normally Hire

Too often our candidate interview process gives an illusion of thoroughness. However, it lacks a method that allows the interviewer to separate the high performers from the low. Sadly, what passes for “best practices” often includes these steps:


You might be thinking that this sounds reasonable enough. Surely, this process will yield some top level candidates? Through years of experience I know that sadly, this isn’t true. At best you might luck out with 25% of A-Player hires.

What the process above lacks is a way to eliminate the three biggest problems in hiring, which are:

A survey by CareerBuilder.com reports that out of 2,000 people, 58% of the candidates lied on their resume. The study showed that prior to the recession only 33% of interviewers took more than 2 minutes to read resumes, and because of rampant lying the figure rose to 42%.

I’m going to reiterate, it is easy for C-Players to write a resume that looks like that of an A-Player. There are dozens of online articles that help with doing just that. Most C-Players know they can get away with faking it because reference checks are superficial.

I’m going to show you how Topgrading eliminates these lies and allows you to consistently hire more A-Players than any other method out there.

Eliminating The Lies With Topgrading

The most effective part of our process is the "Truth Serum", which has worked to scare away undesirable candidates for decades. This simple step has worked over and over again and I swear by it. All company application forms must inform candidates that a final step in hiring is for THEM (not you) to arrange reference calls with former bosses and others.

Aside from that, we also ask for salary history and boss ratings. Because candidates know that they have to arrange reference calls, we find that the information they provide for both turn out to be amazingly accurate. Let’s explore this and other methods a little more:

This process more than triples successful hiring because it solves the biggest problems that account for 75% mis-hires.

Benco Dental And The Cost Of Mis-Hires

Prior to rolling out the Topgrading methodology, George Rable received some pushback from managers who complained of not having 3 hours to conduct an interview. After asking managers for the estimated cost of a mis-hire, George was able to show that in the previous year, mis-hires cost the company ⅓ of its profits!

“Topgrading has become a key component of Benco Dental’s culture. Managers have bought into the need to conduct thorough screening, Topgrading tandem interviews and background checking. We believe our biggest success to date has been our hiring in management. This has a direct impact on the quality of associate hiring as excellent managers hire the best associates,” explains George Rable.

They initially conducted beta tests in the sales area, and after a successful testing period, they rolled out Topgrading throughout the company.

The simple fact is that this method helps you develop and retain top talent. You will dramatically change your organizational culture and raise the performance bar for everyone, attracting more top players to your team.

A-Players like to surround themselves with other A-Players. The result, as George Rable states above, is improved organizational performance. Not to mention the long-term benefits of saving time and money in your organization.

On a more individual level, having employees that you can rely on means you will be able to delegate tasks with peace of mind.

So, before I end this piece, I’d like to ask you to go back to the beginning of the article and calculate how much your mis-hires are costing your company. Would you like to see this figure change? Leave a comment below. 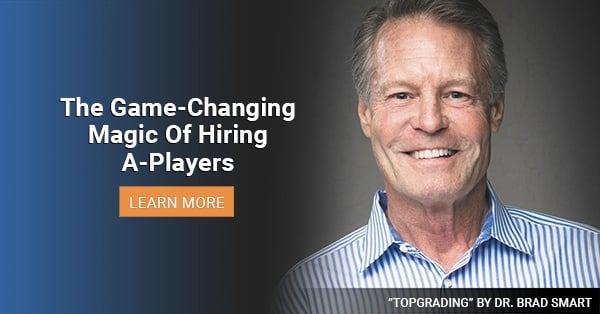 topgrading
mis-hiring
Previous The Game-Changing Magic Of Hiring A-Players For Your Organization
Next How a 2-Year-Old Mint.com Was Sold To Intuit For $170 Million — A Topgrading Success Story